The Board of Directors of Safran (Euronext Paris: SAF), under the Chairmanship of Ross McInnes, at their meeting in Paris on July 27, 2022, adopted and authorized the publication of Safran’s financial statements and adjusted income statement for the six-month period ended June 30, 2022.

CEO Olivier Andriès said: “Safran posted solid results in the first half of the year amid improvement in air traffic in all regions of the world except China. Our ability to ramp up production rates is somewhat constrained by a fragile supply chain as the world emerges from the pandemic and we are working hard to ensure timely delivery to airframers. We will continue to optimize our cost base and implement commercial actions to counter inflationary pressure. We feel confident in achieving our full year guidance and beyond.”

2 Operating income before capital gains or losses on disposals / impact of changes of control, impairment charges, transaction and integration costs and other items

In total, the non-cash impairment charge related to the sanctions against Russia amounts to €(160) million pre-tax.

The favorable working capital evolution (€426 million) reflects significant customer advance payments and strong deferred income from rate per flight hour service contracts. Inventories significantly increased during the first half in an effort to protect on time deliveries to customers.

3 This non-accounting indicator (non-audited) is equal to cash flow from operating activities less change in working capital and acquisitions of property, plant and equipment and intangible assets

Replacing the 2015 Revolving Credit Facility coming to maturity at the end of the year, Safran has set up a €2 billion undrawn sustainability-linked revolving credit facility available until May 2027 (with two one-year extension options) with a cost indexed on reaching two ESG annual objectives (Scope 1 & 2 CO2 emissions and percentage of women among senior executives).

The hedge book amounts to $45.1 billion in July 2022, compared to $32.6 billion in April 2022 notably due to the activation of additional hedging related to the EURUSD rally towards parity. In the meantime Safran continued to hedge year 2025 while lowering the probability of knock-out of the portfolio. The book is composed of options with knock-out barriers spanning from 1.18 to 1.30, representing a risk on the size of the book and on targeted rates in case of a sudden increase of the euro.

The main underlying assumptions are confirmed, in particular those relating to the civil aftermarket revenue growth between 25% and 30% (in $ compared to 2021) and no further disruption to the world economy.

This cooptation, proposed by the French State, is a consequence of the resignation of Vincent Imbert who is retiring from his position within the French Defense Procurement Agency (DGA).

The ratification of his cooptation will be submitted to the 2023 Shareholders’ Meeting.

Alexandre Lahousse has been head of the Industrial Affairs and Economic Intelligence Department (S2IE) of the French Defense Procurement Agency (DGA) since January 1, 2022.

The webcast will be available via Safran’s website after registration using the following link: https://onlinexperiences.com/Launch/QReg/ShowUUID=D1037790-4C7D-45EE-A8FB-767C26050E92.

Participants will have access to the webcast 15 minutes before the start of the conference.

Please make sure you have the latest version of your OS and of any browsers installed on the device you will used before attending this event.

The press release, presentation and consolidated financial statements are available on the website at www.safran-group.com (Finance section).

4 Retrofit is included in OE

Adjusted revenue:
To reflect the Group’s actual economic performance and enable it to be monitored and benchmarked against competitors, Safran prepares an adjusted income statement in addition to its consolidated financial statements.

Readers are reminded that Safran:

Safran’s consolidated income statement has been adjusted for the impact of:

The resulting changes in deferred tax have also been adjusted.


(1) Remeasurement of foreign-currency denominated revenue net of purchases (by currency) at the hedged rate (including premiums on unwound options) through the reclassification of changes in the fair value of instruments hedging cash flows recognized in profit or loss for the period.
(2) Changes in the fair value of instruments hedging future cash flows that will be recognized in profit or loss in future periods (positive €5,601 million excluding tax), and the impact of taking into account hedges when measuring provisions for losses on completion (positive €3 million at June 30, 2022).
(3) Cancellation of amortization/impairment of intangible assets relating to the remeasurement of aircraft programs resulting from the application of IFRS 3 to the Sagem-Snecma merger.
(4) Cancellation of the impact of remeasuring assets at the time of the Zodiac Aerospace acquisition for €139 million excluding deferred tax and cancellation of amortization/impairment of assets identified during other business combinations.

The change of mark to market of instruments hedging future cash flows recorded in financial income in H1 2022 stood at €(5,601) million reflecting the USD rally (from 1.13$ on December 31, 2021 to 1.04$ on June 30, 2022). It purely an accounting entry, with no cash impact, as hedges are intended to be exercised with future receipts of US dollars. 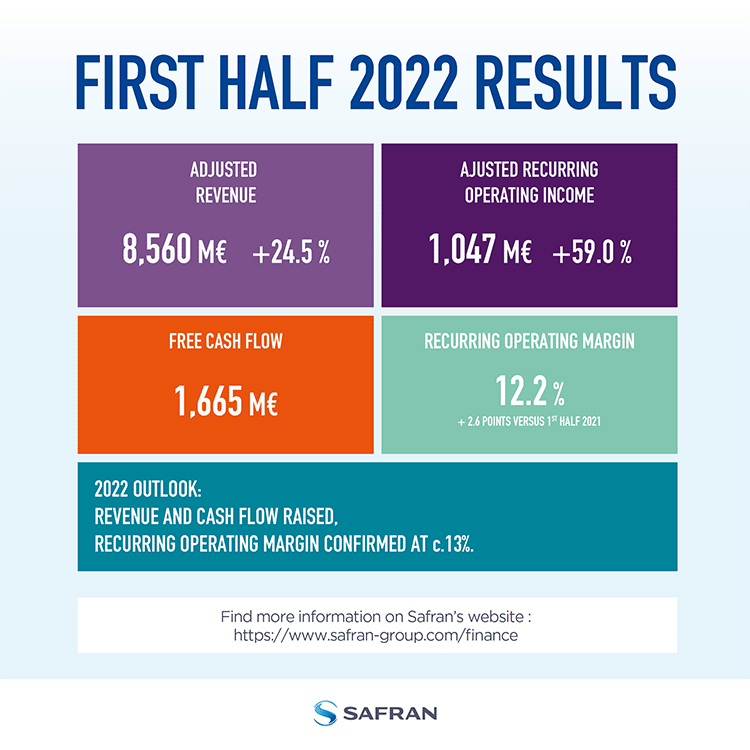 This document contains forward-looking statements relating to Safran, which do not refer to historical facts but refer to expectations based on management’s current views and assumptions and involve known and unknown risks and uncertainties that could cause actual results, performance, or events to differ materially from those included in such statements. These statements or disclosures may discuss goals, intentions and expectations as to future trends, synergies, value accretions, plans, events, results of operations or financial condition, or state other information relating to Safran, based on current beliefs of management as well as assumptions made by, and information currently available to, management. Forward-looking statements generally will be accompanied by words such as “anticipate,” “believe,” “plan,” “could,” “would,” “estimate,” “expect,” “forecast,” “guidance,” “intend,” “may,” “possible,” “potential,” “predict,” “project” or other similar words, phrases or expressions. Many of these risks and uncertainties relate to factors that are beyond Safran’s control. Therefore, investors and shareholders should not place undue reliance on such statements. Factors that could cause actual results to differ materially from those in the forward-looking statements include, but are not limited to: uncertainties related in particular to the economic, financial, competitive, tax or regulatory environment; the risks that the new businesses will not be integrated successfully or that the combined company will not realize estimated cost savings and synergies; Safran’s ability to successfully implement and complete its plans and strategies and to meet its targets; the benefits from Safran’s plans and strategies being less than anticipated; the risks described in the Universal Registration Document (URD); the full impact of the outbreak of the COVID-19 disease.
The foregoing list of factors is not exhaustive. Forward-looking statements speak only as of the date they are made. Safran does not assume any obligation to update any public information or forward-looking statement in this document to reflect events or circumstances after the date of this document, except as may be required by applicable laws.

USE OF NON-GAAP FINANCIAL INFORMATION

Safran, Airbus and CNES at the forefront of Earth-to-Space optical communications