Safran, Airbus and CNES at the forefront of Earth-to-Space optical communications

In partnership with CNES and Airbus Defence and Space and as part of the TELEO project, Safran Data Systems has successfully delivered the first in a series of digital modems dedicated to Earth-to-Space optical communications, the Cortex Lasercom.

Laser optical communications will enable data rates 10 to 100 times higher than the radio frequency communications currently used. As the successor to the Cortex HDR, the world's leading satellite imagery reception modem, Safran Data Systems has developed the Cortex Lasercom modem with processing and decoding capabilities to achieve a record 10 Gigabytes per second bit rate for Earth-to-Space optical communications, a level unmatched anywhere in the world.

The Lasercom Cortex will be used in several cooperative projects between Safran, Airbus and CNES, and will equip future Optical Ground Stations (OGS) marketed by Safran. These OGS will allow communication with all future satellites that will carry laser communication capabilities with the Earth. Two demonstrations on Airbus and CNES programs will take place in 2023, a world first: LASIN on the CO3D constellation of imaging satellites, and TELEO on the future BADR-8 telecommunications satellite. On this occasion, the Lasercom Cortex will be equipped with error-correcting codes developed by Airbus Defence and Space, which allow it to deliver useful and error-free information to the user. 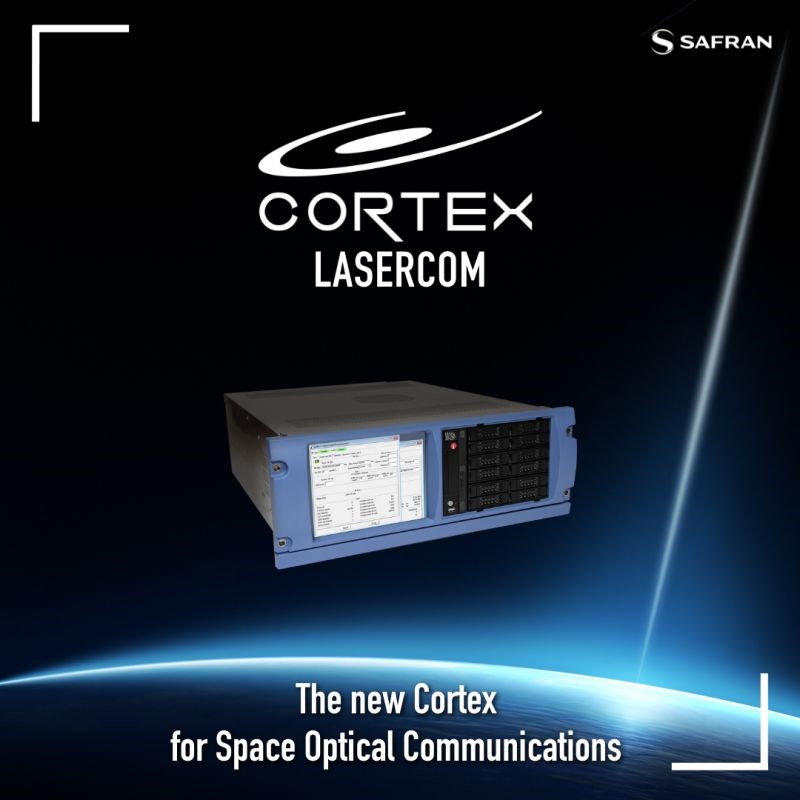 François Gaullier, Senior Vice-President Telecommunications Systems at Airbus Defence and Space said: “Airbus is pleased with the excellent cooperation with Safran Data Systems on the ground modems for its future 10Gbit onboard-ground optical communication systems that will be demonstrated during the TELEO flight experiment in 2023.”

Finally, Caroline Laurent, Director of Orbital Systems and Applications at CNES, emphasized that

Safran is an international high-technology group operating in the aerospace (propulsion, equipment and interiors), space and defense sectors. Its mission: make a lasting contribution to a safer world, where air transport becomes increasingly environment-friendly, comfortable and accessible. With operations on every continent, the Group employs 76,000 people and will generate revenues of 16.5 billion euros in 2020. The Group holds, alone or in partnership, world or European leadership positions in its markets. Safran is committed to research and development programs that preserve the environmental priorities of its technological innovation roadmap.
Safran is listed on Euronext Paris and is included in the CAC 40 and Euro Stoxx 50 indexes.

Airbus Defence and Space, one of the two divisions of Airbus, is the European leader in space and defense. It is one of the world's leading space companies and one of the world's top ten defense contractors. It generates revenues of more than 10 billion euros and a workforce of some 33,000 employees. Its Executive Director is Michael Schöllhorn.
CNES (Centre National d'Etudes Spatiales) is the public establishment in charge of proposing French space policy to the government and implementing it within Europe. It designs and places satellites in orbit and invents the space systems of tomorrow; and promotes the emergence of new services that are useful in daily activities.

CNES, created in 1961, is at the origin of major space projects, launchers and satellites, and is the natural representative of the industry to push innovation. CNES has nearly 2,400 employees, men and women who have a true passion for space, opening up infinite and innovative fields of application: Ariane, science, observation, telecommunications, defense. CNES is a major player in technological innovation, economic development and industrial policy in France. It also establishes scientific partnerships and is involved in numerous international cooperations. France, represented by CNES, is one of the main contributors to the European Space Agency (ESA).