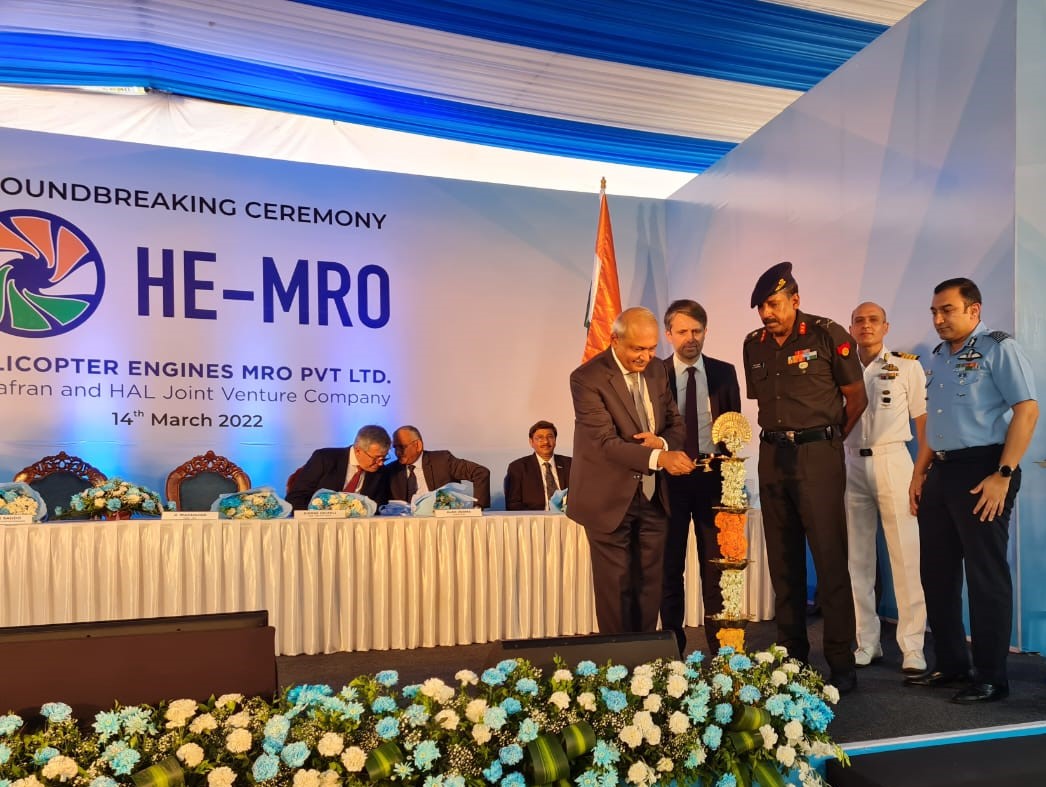 Safran Helicopter Engines and Hindustan Aeronautics Limited (HAL) have broken ground on their Joint Venture facility, Helicopter Engines MRO Pvt Limited (HE-MRO), at Sattari, 40 km from Panaji in Goa.  Mr. R. Madhavan, CMD, HAL, Mr. Franck Saudo, CEO, Safran Helicopter Engines and senior officers from the Indian Armed Forces and HAL were present on the occasion. During the ceremony, both partners signed a “Memorandum of Understanding” to extend their cooperation and explore opportunities for new helicopter engines in civil and military markets, reflecting their commitment to the Indian Government’s vision of “Atmanirbhar Bharat” towards achieving self-reliance in defence technologies and MRO (Maintenance, Repair and Overhaul).

Mr. Franck Saudo commented, “I am very proud to celebrate the launch of this world class MRO Centre for the TM333 and Shakti. This complex will be a key factor for building customer satisfaction and supporting the Government of India’s vision for aerospace MRO in India. Thanks to this joint venture, we will support all HAL helicopters legacy programs while the MoU opens new perspectives to strengthen further our partnership with HAL directly or through such joint venture on future helicopter engine technologies and platforms”.

HE-MRO will be operational by the end of 2023 with a capacity to repair 50 engines a year and a full-capacity goal of 150 engines in the coming years. It will also bring employment opportunities to over 60 qualified engineers and technicians of the region. The facility has an expansion capacity for other engines in the future.

With a fleet of over 1000 engines, including 250 TM333 and over 500 Shakti, India’s Armed Forces are one of the largest operators of Safran-designed helicopter engines and the manufacturer power 100% of HAL-produced helicopters.

Shakti is the Indian variant of the Safran Ardiden 1H1, co-developed with HAL. HAL has produced over 500 plus Shakti engines till date successfully. Shakti is installed on HAL’s Dhruv and Rudra and has also been selected to power the HAL-designed Light Combat Helicopter (LCH). The Ardiden 1U variant powers the new Light Utility Helicopter (LUH), a three-ton single-engine aircraft. The engine was certified by DGCA (India) on July 26, 2021.