The James Webb Space Telescope with Safran on board!

NASA and the Canadian and European space agencies launched the James Webb telescope from the Guiana space center in Kourou on December 25, 2021. This fine example of cutting-edge technology will observe outer space and shed light on some of the countless mysteries of our universe... with Safran on board!

The James Webb Space Telescope (JWST) succeeds the Hubble Space Telescope, which is coming to the end of its mission. On December 25, 2021, the JWST was launched on board Ariane5, heading for Lagrange L2 point 1.5 million kilometers away from Earth. From here, it will observe the outer limits of our universe thanks to the best cutting-edge technology available. 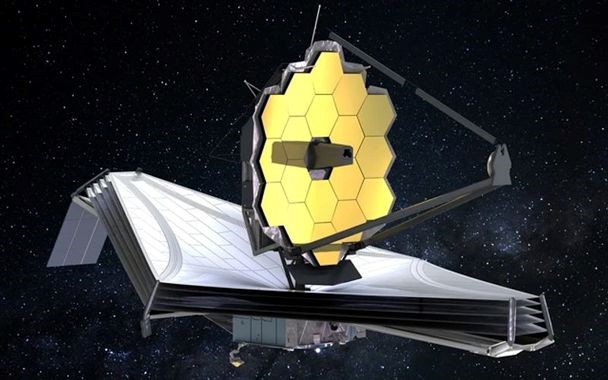 A telescope in tune with scientific progress

The James Webb project was launched by NASA in 1989. The aim was to begin designing the telescope that would succeed Hubble, the first space telescope launched into orbit in 1990.  However, it wasn't until the early 2000s that the technical architecture and scientific goals of the JWST were fixed. At this time, the Canadian Space Agency (CSA) and the European Space Agency (ESA) joined the project, with a view to using the telescope in exchange for sharing its costs. The ESA's participation also led to Safran Reosc being selected to develop some of the technological components of the future space telescope.

Once the telescope's overall design was completed and its developers selected, the project went into construction phase in 2008.  The telescope was designed to significantly outperform Hubble: it would be able to look 13 billion light-years into the as yet unknown cosmos. Which is why it is part of NASA's Origins Program, which studies the origins of our universe.

In so doing, the JWST project aims to find answers to some of the many mysteries surrounding the universe right after the Big Bang, the formation of stars and galaxies, the chemical composition of distant stars, and the vital conditions for the beginning of life on Earth...

An origami-like technological work of art

The telescope - the most powerful ever to be designed - cost a total of 10 billion dollars to develop. In order to fit inside the ArianeGroup launcher's payload fairing, the telescope's 6.5-meter diameter primary mirror and sunshield are folded up like origami.  The telescope will unfold gradually during its journey to the Lagrange point.

In order to observe the farthest reaches of outer space and fulfill its goals, the JWST is equipped to make observations in the near and mid-infrared spectrum. In this part of the light spectrum, astronomers are able to observe the universe's most ancient upheavals and dimly shining stars due to a physical phenomenon called redshift. The JWST is also able to observe the portion of the visible spectrum corresponding to the most distant observable objects.  In concrete terms, the telescope's observation capabilities are 100 times higher than those of its predecessor Hubble, which makes it the most powerful telescope in orbit.

To observe this part of the light spectrum, the James Webb telescope has four key instruments, in addition to its primary mirror: 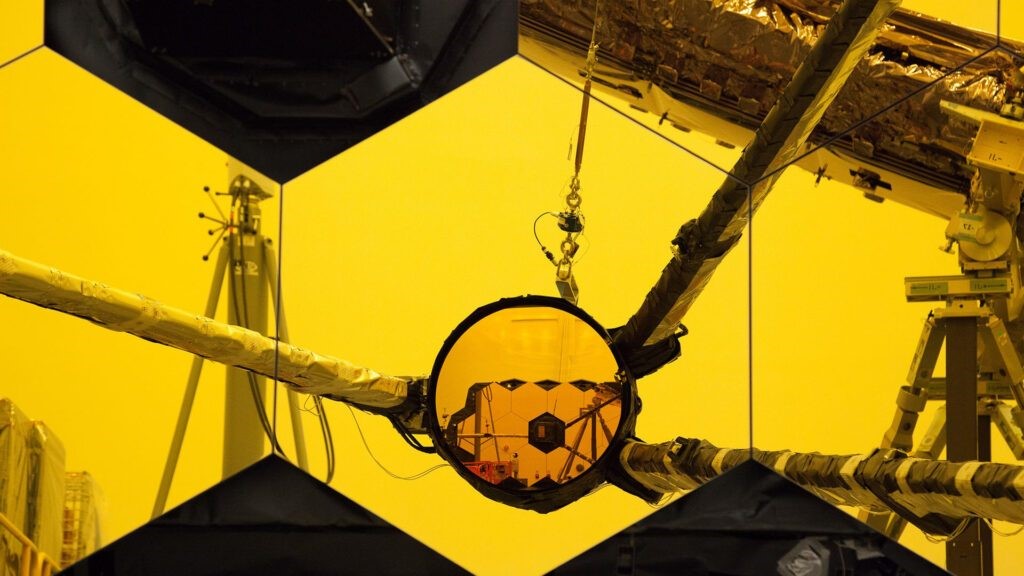 Safran Reosc and Safran Data Systems on board!

For Safran Reosc, the James Webb adventure began in autumn 2005...

The contract comprises delivery of all 34 mirrors, some of which are mounted on their flight structure. The mirrors will be fitted to the NIRSpec instrument to provide spectral mapping of the near-infrared band, whilst differentiating almost 100 celestial objects. The specifically designed instrument will therefore be able to observe very distant, dim galaxies close to the origins of our universe…

One of the distinctive features of the instrument is that its components - mirrors, support structures, platform, etc. - are made almost entirely from silicon carbide (SiC). Much lighter than steel, this material also has excellent properties for making very high quality mirrors. Using just one material also helps maintain the instrument's performance in spite of temperature variations and the cryogenic vacuum.  The instrument actually maintains its optical performance as it cools, whereas using other materials (like on the GMT, for example, for which Safran Reosc supplied glass mirrors) would have caused mirror distortion and therefore a deterioration in performance.

Throw back on the NIRSpec activities 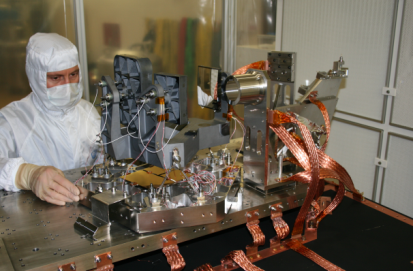 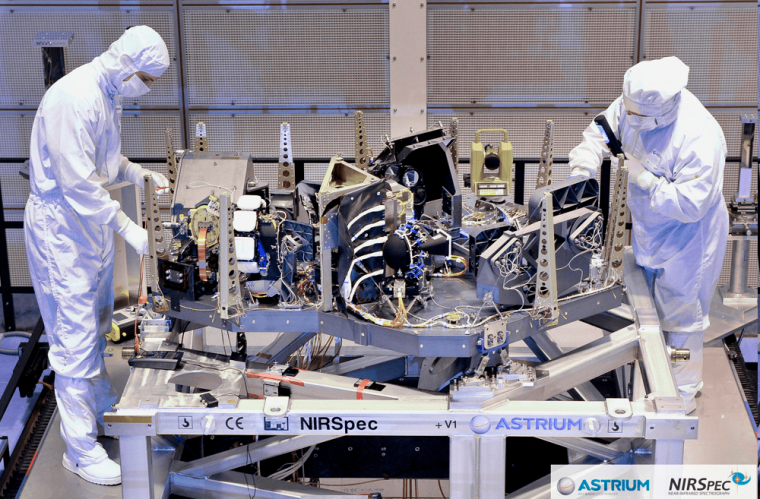 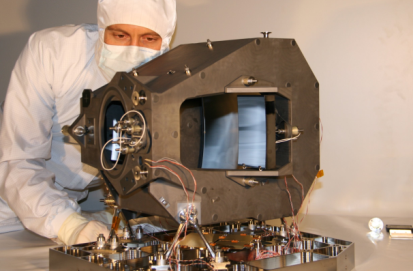 NIRSpec was a very interesting project and I am really proud to have helped build these optics.

It marks the completion of an assignment with a really good feel to it, probably the best project I ever worked on at Reosc. I was incredibly lucky to have helped see this project through

I am so proud to have worked on this project, both on a personal level and for the whole team. There was real collective enthusiasm. It was a great adventure for humanity, and one for which we hope to see the results with our next space discoveries.

NIRSpec was the first project I managed at Safran Reosc and it was an incredible experience. It gave me the opportunity to build ties with many of my colleagues as we were brought together on this one project. And, from a technical perspective, I learnt about all Safran Reosc's activities. This was a great experience which I still use on my projects today.

Safran Data Systems' equipment collects, transmits and receives on the ground a multitude of mission parameters onboard the launcher. These data are displayed in real time in the mission control rooms at Kourou and at NASA, and on videos transmitted over public networks, providing a picture of the health of the launcher and its payload. Safran Data Systems is supplying the entire telemetry chain, including instrumentation boxes, transmitters, tracking antennas along the rocket's path, receivers and data decommutation and display software.

Making the link with Earth

The information collected by the James Webb Space Telescope will be transmitted in Ka-band and received on Earth by high-speed CORTEX receivers from Safran Data Systems, for use by science teams.

To fulfill its mission, the telescope will also have to maintain its position and control its orientation, while using communications systems to transmit data and receive orders. Safran Data Systems supplied the CORTEX command and control modems that link the James-Webb to NASA's Deep Space Network control center. The control center will monitor many parameters thanks to these devices to ensure that the telescope is working properly and to send it all the necessary instructions, from its arrival at the Lagrange point to the end of its operational life.

Safran Data Systems also supplies key elements of the backup chain for the Ariane 5 launcher, such as the remote control box on board the launcher and the ground control bay. The back-up chain protects people during the initial phases of flight, enabling the CNES safety team to destroy the launcher if necessary. 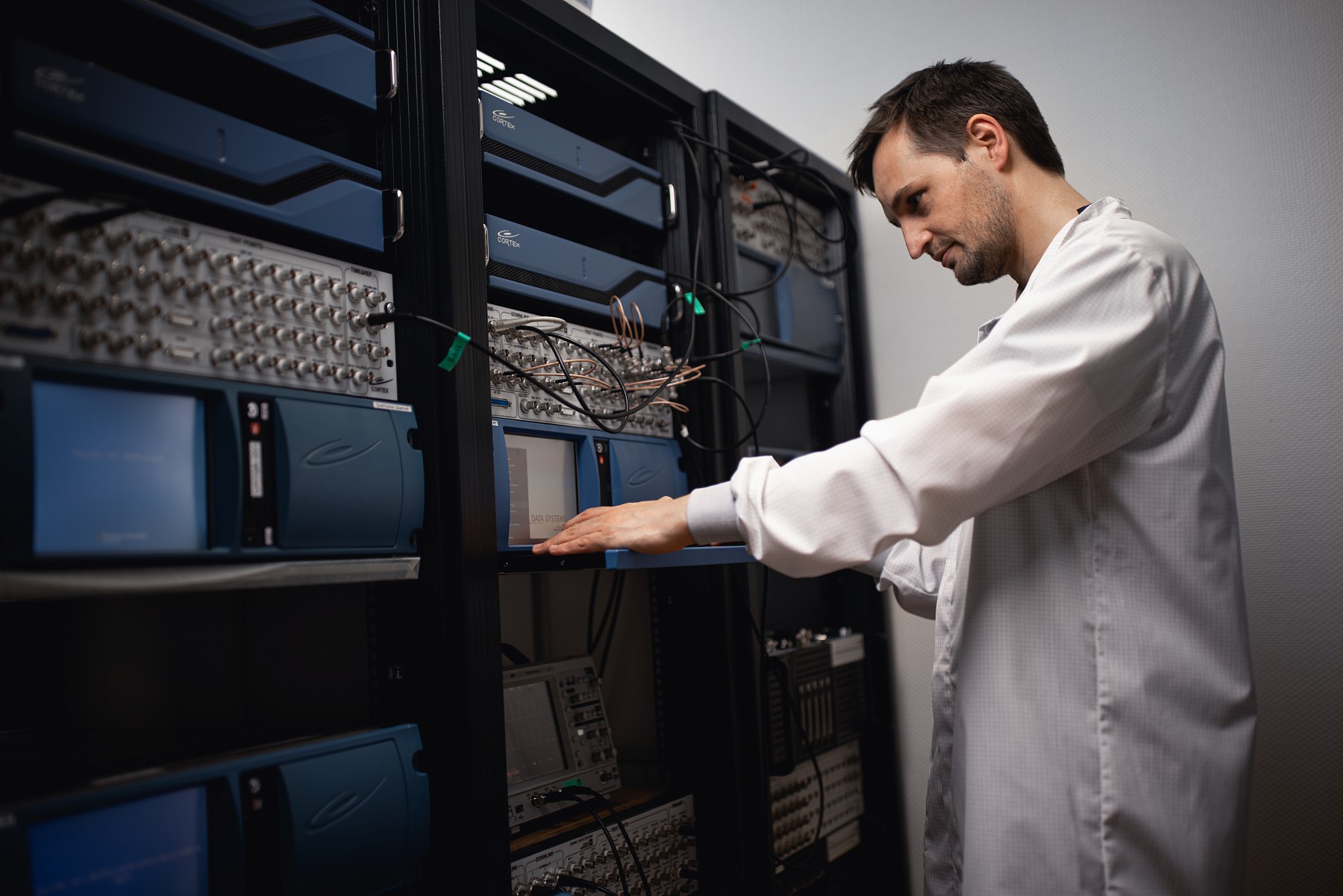 The research and development laboratory of the CORTEX platform.

In all, the James-Webb's mission should last at least five years and enables us to unlock some of the secrets of our universe. At Safran, we're proud to be part of this adventure!