Safran conducts its business activities in accordance with the highest standards of transparency, integrity and professionalism in line with its strong values and ethics shared by all its employees.. The Group is a leader in the fight against corruption and a strong advocate of commercial compliance. Safran's commitment to act as a responsible business is one of the four pillars of its CSR strategy.

A Group united around strong shared values and ethics 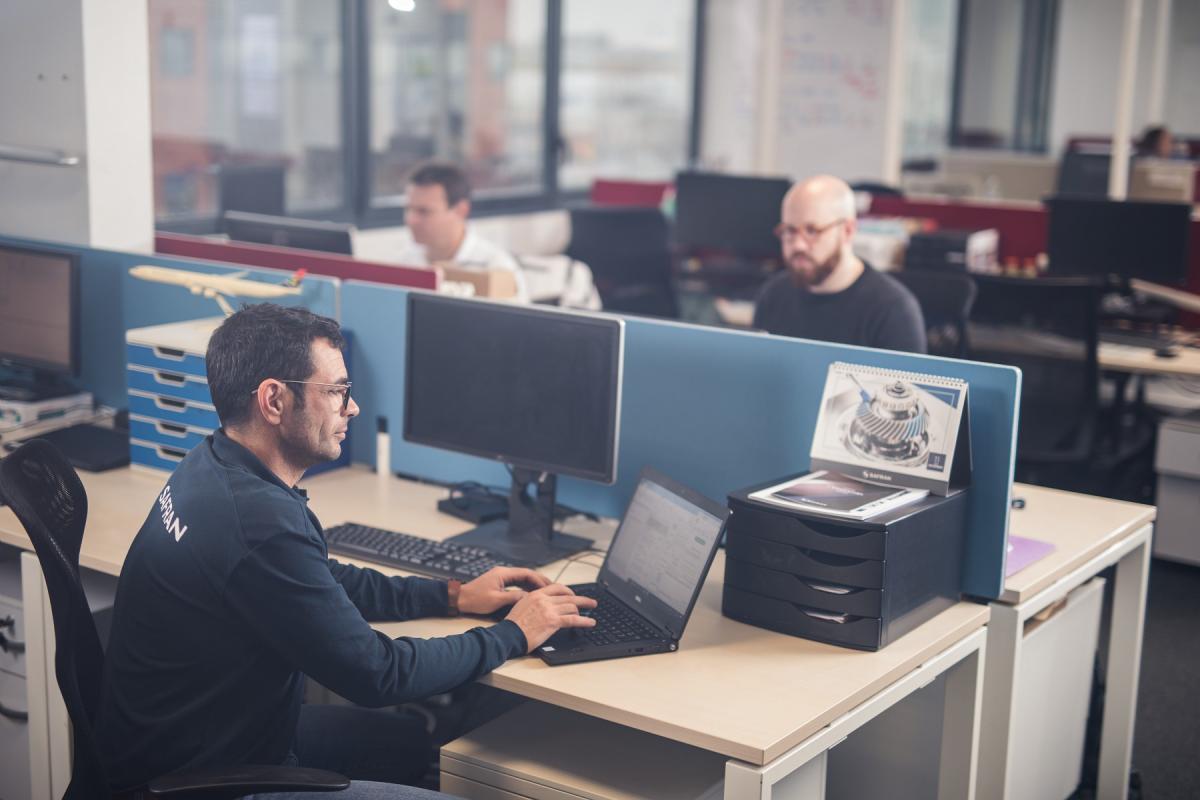 At Safran, ethics is a key value shared by all employees. For a number of years, the Group has operated a program for the prevention and detection of corruption risks, based on a policy of zero tolerance towards any practice in contravention of anti-corruption measures, influence peddling, misappropriation and favoritism. This strategy is implemented through a code of conduct accessible to all Safran employees worldwide, and an ethics charter, formally stating the Group's shared principles, that employees can refer to at all times.

Our Code of conduct and Ethical guidelines 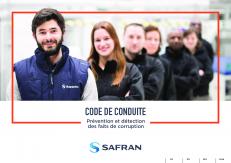 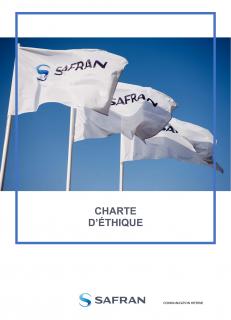 Practical measures in the fight against corruption

All decisions taken, and all related actions, are based on Safran's own needs, rather than the personal interests of its employees.

Safran does not permit the giving or receiving of gifts and invitations whose purpose is to obtain an unwarranted favor or influence a business decision or official action. Given and received gifts are recorded to ensure their traceability, and are subject to an approval process that takes account of their value.

Safran prohibits its employees from making payments aimed at facilitating or speeding up the completion of administrative procedures or formalities.

Safran has a rigorous procedure for selecting and approving the business partners with which it works.

Safran is committed to ensuring that its lobbying activities are conducted with integrity and transparency, in compliance with the various applicable regulations and legislation and in accordance with the principles of Safran's responsible lobbying charter.

Donations made by Group companies are subject to a rigorous validation process. Charitable transactions are conducted transparently and documented. Patronage and sponsorship activities are undertaken only with organizations whose objectives relate to education, social or cultural areas, and without any commercial benefit in return. The financing of political parties on behalf of Safran is strictly prohibited.

Selection of suppliers and subcontractors

Safran requires its suppliers and subcontractors to meet high standards of compliance with anti-corruption laws and regulations in force in the countries in which they operate or provide services. An ethics clause is included in the purchasing contracts that Safran signs with its suppliers, and also in the Group's general purchasing conditions.

More about Safran and its suppliers

A proactive approach to preventing corruption 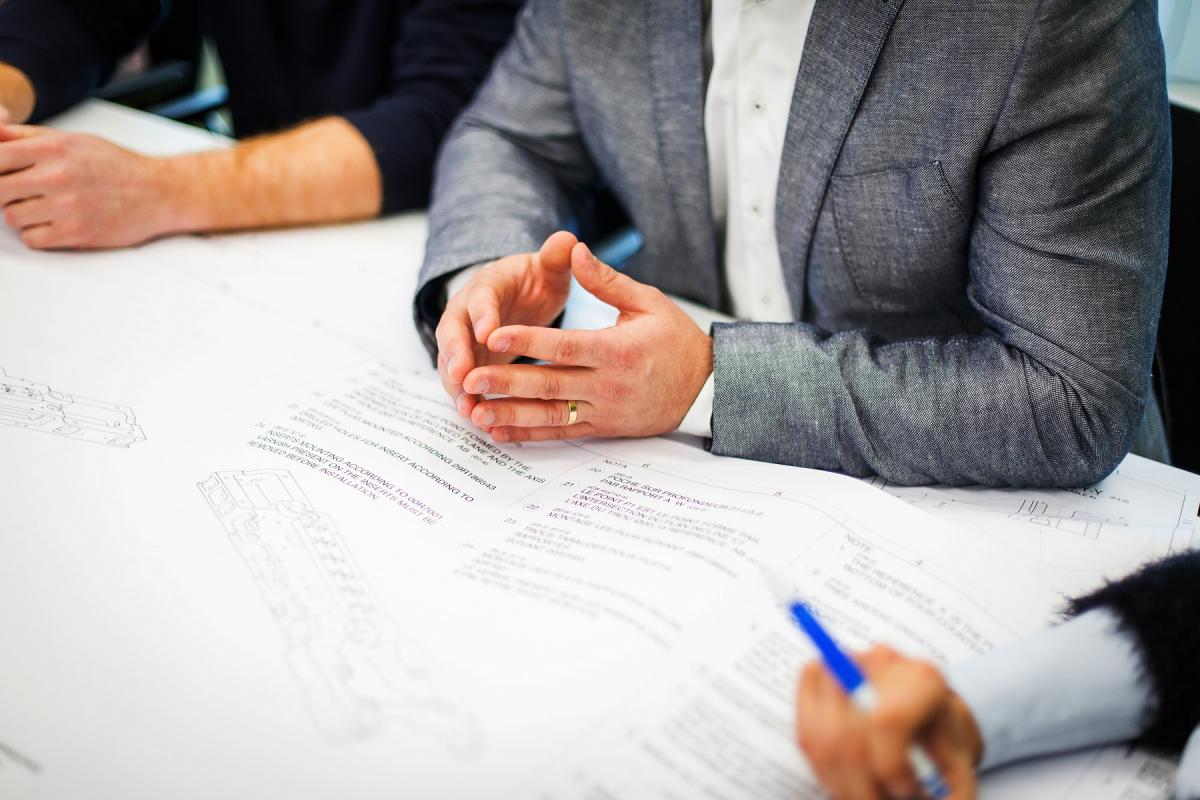 Safran is the first CAC 40 company to receive anti-corruption certification from France's ADIT technical information dissemination agency (in 2012). This certification is an endorsement of the processes implemented by the Group, acknowledging the efforts undertaken to ensure that its rules and procedures are in line with international standards. The referential "Mazars / ADIT" certification framework used as the basis for certification includes more than 200 control points. It incorporates national and international laws and regulations (FCPA, UK Bribery Act, OECD Convention, the tenth principle of the United Nations' "Global Compact" program), and existing best practice.

If you have any questions about a situation or behavior that might be contrary to the Group's principles and commitments, its employees, clients, suppliers or any other external stakeholder may use the special reporting channels to share information about the following:

Provided the person submitting the report has acted in good faith, no disciplinary or discriminatory action will be taken against them, even if the facts reported prove to be unfounded after processing or investigation. It is recommended that employees, temporary workers and external staff who wish to report a situation identify themselves, as their identity will be treated as confidential. However, in compliance with certain local laws, the report may be anonymous. The Group is committed to taking all necessary steps to protect the identity of individuals who report or share information about any of the situations described above. Their identity cannot be communicated to the person implicated in the report, except with the express agreement of the individual concerned. The information collected during processing will be treated confidentially, subject to legal obligations or proceedings being initiated, if any. 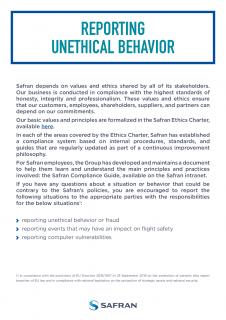 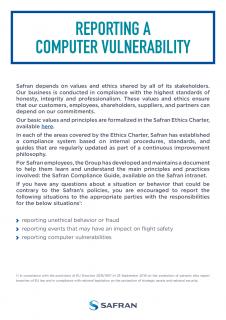 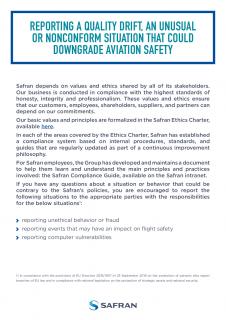 Areas covered by the certification 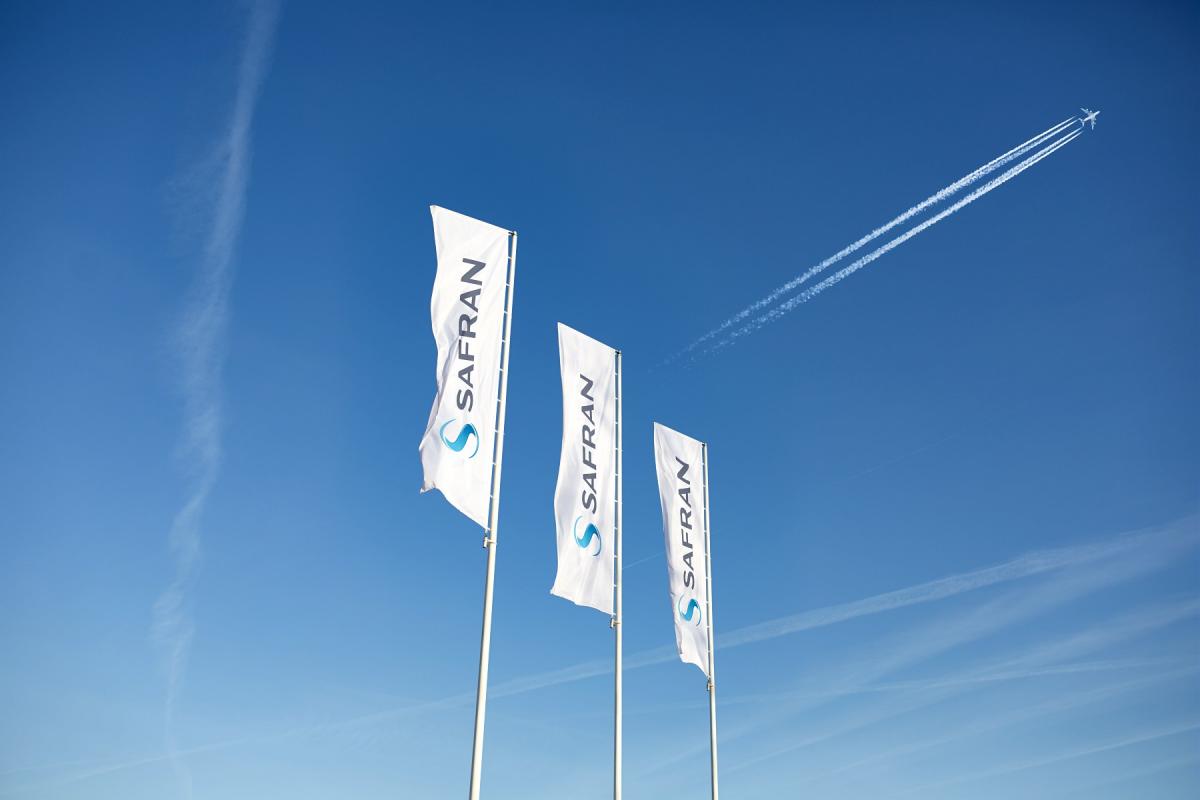 An approach with international scope

Safran is a stakeholder in the most ambitious anti-corruption initiatives worldwide, and an active member of the World Economic Forum's working group on the fight against corruption in the airline industry (Aviation and Travel Partnership Against Corruption Initiative: Safeguarding Aviation and Travel Value Chains). Safran takes its civic responsibilities seriously as a Group, and also adheres to the United Nations Global Compact, in this way demonstrating its membership of a worldwide community of companies committed to human rights, labor law, the environment and the fight against corruption. This approach forms part of a constant goal of progress and sustainability in the Group's business.

Trade in accordance with the highest compliance standards 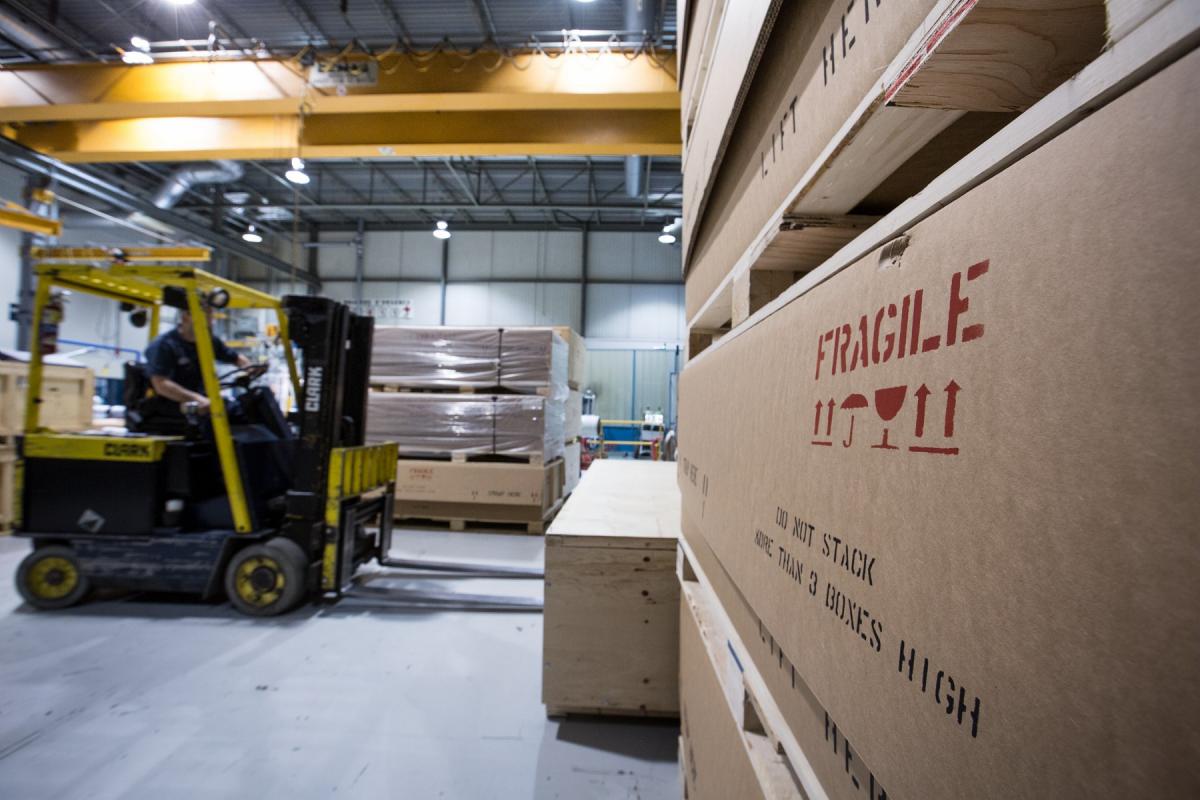 In all cases, Safran complies with all regulations applicable to its export and import activities relating to military or dual-use technologies. The Group has also specified shared requirements covering all its companies with regard to the control of exports and re-exports to third countries. They form the Safran compliance standard, which is structured into nine areas of compliance. Frequent audits are held to ensure it its correct implementation. Lastly, Safran has set up a dedicated organizational structure to comply with applicable regulations. 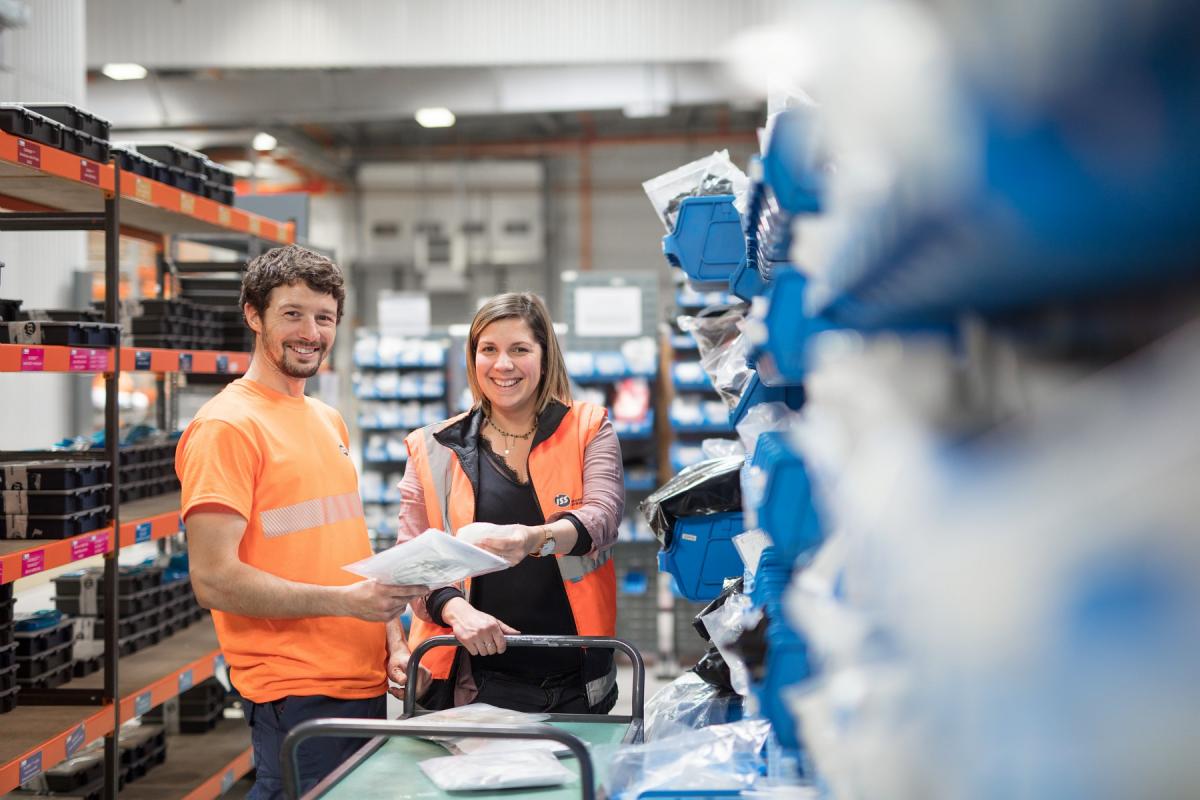 The requirements of the Safran compliance standard 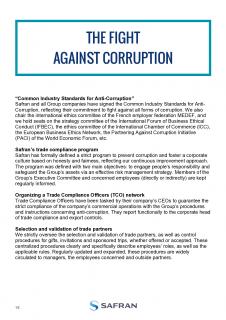 Prevention of corruption at Safran 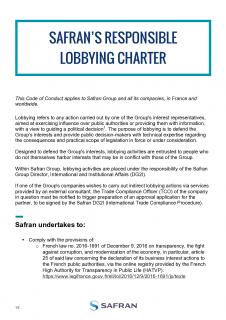 Sustainable procurement: a relationship of trust between Safran and its suppliers

As part of its procurement policy, Safran aims to work with performance-driven and reliable suppliers, who strictly abide by local and international regulations. They must comply not only with international trade laws and environmental standards but also with rules regarding ethics, social concerns, and health & safety.

In 2021, Safran sourced 49,7% of its procurements in France, 82% of which are from small and medium-sized companies. Safran is a signatory of several commitments in support of this relationship of trust:

Do you want to contact the Group's SMEs representative/ internal mediator? [email protected]